Lindsey Bergner, EMBA ’22, used her time at HEC Paris to help facilitate a move away from HR. She says the Executive MBA program’s schedule flexibility, its remarkably diverse cohorts, and the exhaustive research of its Capstone Project was crucial in helping her transform her career and land a new position— in a completely new function— at Cartier.

Picture this: you’re a Southern California native living in Geneva, working in Human Resources for a Swiss luxury giant. HR, never a burning passion, is a field that you have nevertheless grown to appreciate.

After all, it has been good to you.

It gave you a foothold, and then traction, in Europe. And, as your career gathered pace, success in HR roles paved the way for a satisfying jump from Oil & Gas to a dream company and industry: luxury, and Richemont.

Working in human resources was seizing an opportunity. As it happens, you like it. You’re good at it. You may even have a comfortable future in it if you want.

But now, you find yourself at a crossroads.

In your mind, HR—fascinating as it may be— does not represent the most compelling future for your career.  Not for you, anyway. You take it upon yourself to plot a career path with the intention to be truer to yourself.

This was Lindsey Bergner’s reality not long ago.

Laying the groundwork for career transformation and growth

“I wasn’t really interested in learning and development, or HR business partner or anything like that,” she says, recalling career possibilities she envisioned might lay before her had she remained in talent acquisition.

“At a turning point in my career, I knew the next thing had to be something on the business side.”

So, when an opportunity presented itself at her firm to join a skills-boosting internal learning and development program, she didn’t think twice. 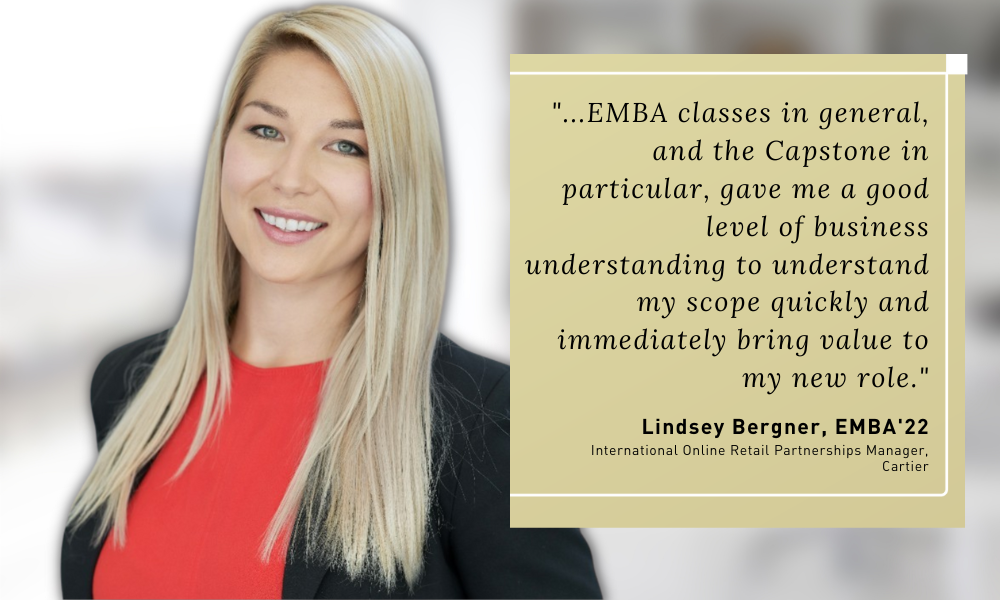 Why an EMBA? Why not a full-time MBA?

Finding oneself at a career impasse around the age of 30 is common enough. For many that aspire to management positions, one of the most common avenues is via a full-time MBA. And for many, it makes sense: how better to drastically upskill than to do so flanked by a cohort of highly motivated people around the same age as yourself?

And yet, the idea of becoming a full-time student again just didn’t appeal to Lindsey. As much as she wanted a change in function, she just didn’t want to leave her company.

“I was quite happy with the company, but I was very clear that if I wanted to move from HR. The easiest route for me was going to be internally. Staying at Richemont meant I could count on my reputation.”

She reasoned she could leverage her own appeal internally as a known quantity, since investing in her meant that “they wouldn’t be taking such a big chance.”

“If I had quit my job and try to make this change at another company, it would be much more difficult. It also made more financial sense, given the fact I would still be earning my full salary while studying.”

An EMBA program’s inherent schedule flexibility, she surmised, would be a good way to circumvent the schedule crunch of a full-time MBA. So, Lindsey would remain in her role full-time while pursuing rigorous executive management training at the same time.

She very quickly decided it would be the HEC Paris Executive MBA program for her— or nothing.

Applying when she was 31, she knew that she would be among the youngest members of her intake, if not the youngest. It’s no coincidence that EMBA students who share age overlaps with full-time MBA students are rare— and this would be brought up by EMBA admissions at some stage.

Yet throughout her circuitous career path, she had always demonstrated the ability to articulate the nuances in her added value. 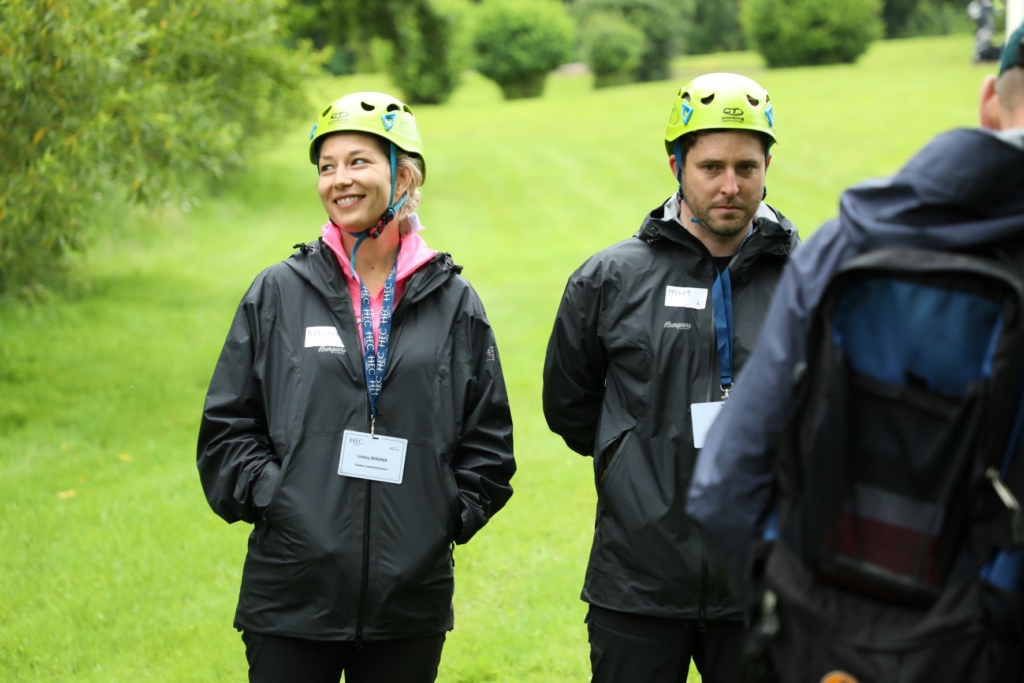 Lindsey during the EMBA Leadership Seminar.

“They did bring up my age. They asked whether I would feel comfortable among an EMBA group, many of whom would be CFO’s, HR Directors, and so forth, while I was only managing one person directly at the time,” she explains.

“I replied that age is just a number. I had no problem voicing an opinion. Moreover, I believed it was good to have diversity in terms of age and generations to bring different perspectives to the discussion.”

“As long as you’re contributing and thoughtful about bringing your views and perspectives, I think there’s really no issue in being a little younger than the rest.”

When she began, the first thing that struck her about her intake was the richness of perspective made possible through diversity. 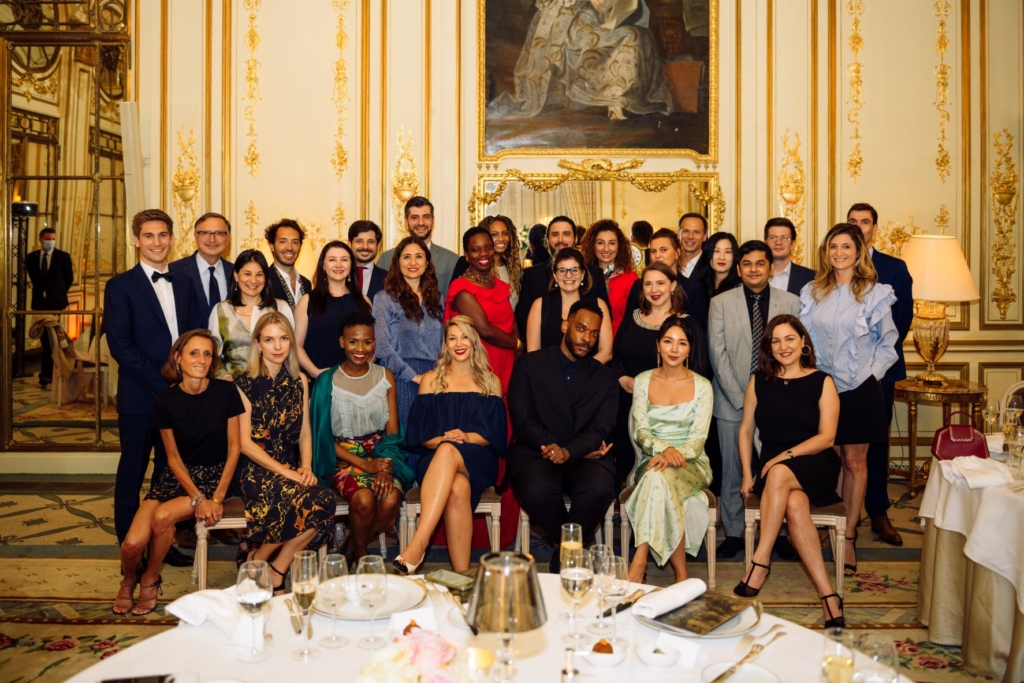 “I met people that I would never have if I hadn’t done the EMBA,” she explains. “There was a chief scientist in biotech in my class. There’s no way I would have met this person otherwise, working in luxury.

“Class diversity not only comes from nationality, but from the many roles people have in different industries. You learn so much from the people around you, even from something as simple as conversations over lunch.”

The Capstone Project is the final deliverable of the Executive MBA program. A comprehensive, research-based project, the project represents a significant allocation of time and effort.

The EMBA outcome she was pursuing was to land a leadership role in which she had no prior experience. Knowing this, Lindsey took full advantage of the Capstone project’s exciting potential from the outset of the program, throwing herself into a deep dive of the high-end watch and jewelry market for the better part of a year.

This immersive research experience paid immediate dividends during the interview for her new role.

“It equips you with a lot of information to pull from in your interview,” she says.

“I was able to provide insights into the watch and jewelry market, along with current dynamics and trends. I believe this gave me a good level of credibility considering I was interviewing for a role that I had no direct experience in.

EMBA classes in general, and the Capstone in particular, gave me a good level of business understanding to understand my scope quickly and immediately bring value to my new role.” 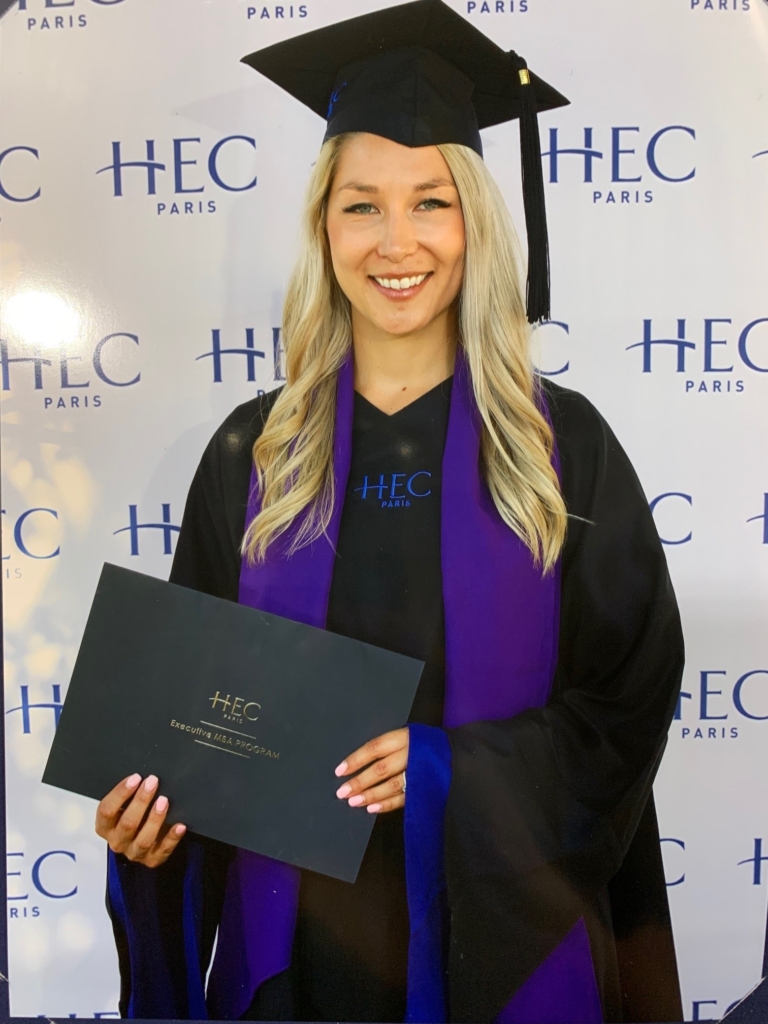 If HR provided her career with grounding, the EMBA gave Lindsey a helping of gravitas to bring its trajectory abreast of her ambition. Not long ago, such a leap may have been difficult for her to imagine being realistic, she says.

The 18-month program behind her, she puts herself in the shoes of someone only beginning to consider the idea, just as she was not so long ago.

“I think you have to stand up for yourself,” she muses. “Nobody else is going to do it for you.”

More CEOs of Fortune Global 500 companies have graduated from HEC Paris than any other university in Europe. Nearly 4,000 graduates are currently CEOs, CFOs, or have founded their own companies. The Executive MBA at HEC Paris perennially ranks among the best in the world; click here to learn more.

To get the latest news and information about the HEC Paris Executive MBA delivered straight to your inbox, sign up for our newsletter.

If you’re ready to take the next step in your EMBA journey, introduce yourself  to our recruitment team.